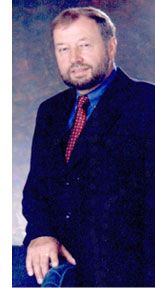 Fascinated by electronics during his high school years, Mr. Buchmann took to inventing at an early age, designing a fuel-powered engine that was based on continuous combustion. His drawings and theory of operation were reviewed by Felix Wankel, inventor of the Wankel Rotary Engine, who kindly replied that while the design was indeed unique and original, manufacturing would be too expensive to be commercially viable. Further to his credit, Mr. Buchmann invented a broadcast radio that ran on no power — it required only an antenna and a ground connection (it didn’t even use a battery). Mr. Buchmann sold several of these radio receivers to his family and colleagues and later set up a workshop in the attic where he restored and resold old radios. After high school, a four-year apprenticeship as a Radio Technician brought him practical experience in a workshop environment as well as academic theory. Finally, his experience with radio communications in the Swiss army led to his decision to make electronics his life's work.

Realizing that conservative Switzerland would not satisfy his entrepreneurial spirit, Mr. Buchmann emigrated to Canada in 1966, eventually finding employment in the radio communications department at General Electric. There he realized that a major problem with two-way radios was the battery's short life and, as part of his job, tested a wide variety.Chapter 18: Beginnings and Horizons of customer batteries that came in. In his spare time at home, he continued to research and develop electronic devices in his spare time, developing a battery analyzer that featured a ‘recondition’ program which restored weakened nickel cadmium batteries.

To prevent a conflict of interest with his employer, Mr. Buchmann quit his job with GE and started Cadex. The first battery analyzer, the Cadex 450, was introduced in 1981 but failed to achieve the anticipated market acceptance. Still in his spare time, Mr. Buchmann designed the modular Cadex 550 battery analyzer. This model sold reasonably well at first but it soon became evident that manufacturing methods needed to be improved to make it cost effective.

In 1984, Cadex moved from a small room in Mr. Buchmann's residence to rented facilities. With increased overhead costs, a staff to maintain and sluggish sales, cash flow became tight. Bank loans for start-up companies, especially high-tech firms, were almost non-existent at the time, so Mr. Buchmann worked from home during the day looking after his growing children and spent time in the office during the evening. Happily, the company survived the slump and managed to add a number of new products. Profitability returned and the staff grew.

Knowing that the wealth of an organization is in human resources, Isidor resolved to provide an environment that was conducive to attracting good people with skills that complemented his own strengths and weaknesses. Spacious new headquarters in a park-like setting overlooking the scenic Fraser River add to a pleasant working experience. Under Mr. Buchmann’s leadership, new and innovative products were developed that generated rapid growth and created global recognition of Cadex.

Today, Cadex is a world leader in the design and manufacture of battery analyzers and chargers.