3.1. HOW MEMORYWORKS WITH THE PROCESSOR 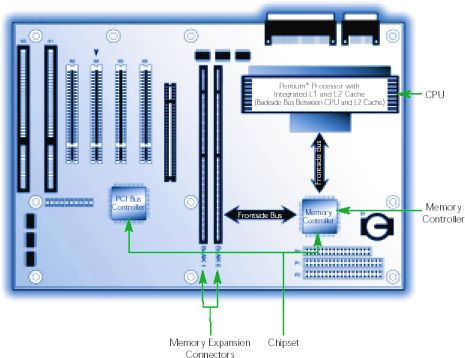 Main components of a computer system.

The CPU is often referred to as the brain of the computer. This is where all the actual computing is done.

The chipset supports the CPU. It usually contains several "controllers" which govern how information travels between the processor and other components in the system. Some systems have more than one chipset.

The memory controller is part of the chipset, and this controller establishes the information flow between memory and the CPU.

A bus is a data path in a computer, consisting of various parallel wires to which the CPU, memory, and all input/output devices are connected. The design of the bus, or bus architecture, determines how much and how fast data can move across the motherboard. There are several different kinds of busses in a system, depending on what speeds are required for those particular components. The memory bus runs from the memory controller to the computer's memory sockets. Newer systems have a memory bus architecture in which a frontside bus (FSB) runs from the CPU to main memory and a backside bus (BSB) which runs from the memory controller to L2 cache. 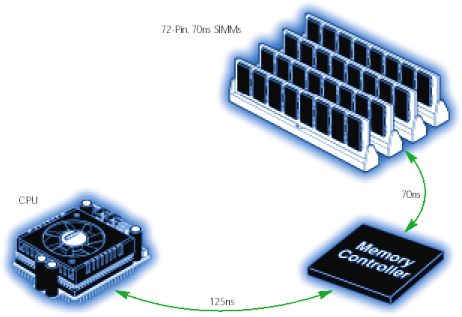 Beginning with Synchronous DRAM technology, memory chips had the ability to synchronize themselves with the computer's system clock, making it easier to measure speed in megahertz, or millions of cycles per second. Because this is the same way speed is measured in the rest of the system, it makes it easier to compare the speeds of different components and synchronize their functions. In order to understand speed better, it's important to understand the system clock.

A computer's system clock resides on the motherboard. It sends out a signal to all other computer components in rhythm, like a metronome. This rhythm is typically drawn as a square wave, like this:

In reality, however, the actual clock signal, when viewed with an oscilloscope, looks more like the example shown below.

Each wave in this signal measures one clock cycle. If a system clock runs at 100MHz, that means there are 100 million clock cycles in one second. Every action in the computer is timed by these clock cycles, and every action takes a certain number of clock cycles to perform. When processing a memory request, for example, the memory controller can report to the processor that the data requested will arrive in six clock cycles.