In addition to form factors, memory technologies, and error checking methods, there are several other specifications important to understanding and selecting memory products.

Prior to SDRAM, memory speed was expressed by access time, measured in nanoseconds (ns). A memory module's access time indicates the amount of time it takes the module to deliver on a data request. So, smaller numbers indicate faster access times. Typical speeds were 80ns, 70ns, and 60ns. Very often, you can identify the speed of a module by the part number on the chip: such part numbers end in "-6" for 60ns, "-7" for 70ns, and so on.

In most cases you can conform to a computer system's memory specification with a module rated at the required speed or faster. For example, if your system requires 70ns memory, you can use both 70ns and 60ns memory without a problem. However, some older systems check the module ID for the rated speed at system-boot up, and will only boot up if they recognize the exact speed they are looking for. If the system has an 80ns speed specification, for example, it won't accept anything different than 80ns, even if it is faster. In many cases, modules could still be built for these systems with faster memory chips on them, but the ID on the module would be set at the slower speed to insure compatibility with the system. This is why you can't always be sure of the rated speed on a module by looking at the speed markings on the memory chips.

Beginning with the development of SDRAM technology, memory module speed has been measured in megahertz (MHz). Speed markings on the memory chips them-selves are typically still in nanoseconds. This can be confusing, especially since these nanosecond markings no longer measure access time, but instead measure the number of nanoseconds between clock cycles. For SDRAM chips with speeds of 66MHz, 100MHz, and 133MHz, for example, the corresponding marking on the chips are -15, -10, and -8, respectively.

This table shows the method for determining speed equivalencies between MHz and ns ratings.

Converting MHz to bytes per second can be confusing at first. The two most important pieces of information you need to make the conversion is the speed (in MHz) and the width (in bits) of the bus.

Registers and buffers improve memory operation by “re-driving” control signals in the memory chips. They can be external to the memory module, or they can be located on the module itself. Having registers and buffers placed directly on the memory module, enables a system to support a greater quantity of modules. So, you’re likely to find these types of modules in servers and high-end workstations. It is important to note that when upgrading, unbuffered and buffered (or registered) modules cannot be mixed.

Buffering (EDO and FPM): For EDO and fast page modules, the process of re-driving the signals is called buffering. With buffering there is no loss of performance. 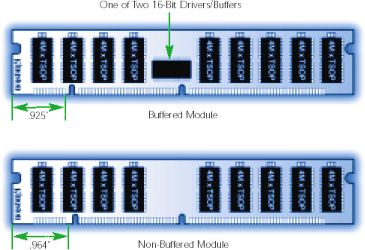 An example of a buffered and a non-buffered module. They are keyed differently, to ensure that they can’t be used in place of one another.

A multiple-banked module allows more flexibility in type of chips used. Multiple banking allows a memory designer to divide the module into banks, which means it can appear to the computer system to be more than one module. This design is equivalent to the banks of memory sockets in a computer: the system accesses one bank of memory at a time, regardless of how many actual memory sockets comprise a bank.

Memory modules are manufactured with either tin leads (connectors) or gold leads. Gold is a better conductor than tin. However, because tin is much less expensive than gold, computer manufacturers began using tin sockets on system boards in the early 1990s to reduce their costs. If you’re buying memory and you have a choice