denote any continuous-time signal having a continuous Fourier transform

denote the samples of

at uniform intervals of

can be exactly reconstructed from its samples

if and only if

Proof. From the Continuous-Time Aliasing Theorem of §A.2, we have that the discrete-time spectrum

can be written in terms of the continuous-time spectrum

is the ''digital frequency'' variable. If

, then the above infinite sum reduces to one term, the

term, and we have

At this point, we can see that the spectrum of the sampled signal

coincides with the spectrum of the continuous-time signal

. In other words, the DTFT of

is equal to the FT of

between plus and minus half the sampling rate, and the FT is zero outside that range. This makes it clear that spectral information is preserved, so it should now be possible to go from the samples back to the continuous waveform without error.

, we may simply take the inverse Fourier transform of the zero-extended DTFT, i.e.,

as the DTFT of the samples

, the formula for reconstructing

as a superposition of sinc functionsweighted by the samples, depicted in Fig. A.1, is obtained: 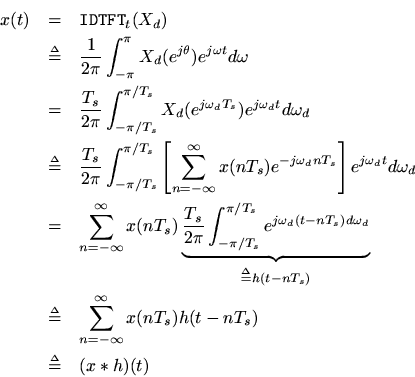 The ''sinc function'' is defined with

in its argument so that it has zero crossings on the integers, and its peak magnitude is 1. Figure A.2illustrates the appearance of the sinc function.

We have shown that when

is band-limited to less than half the sampling rate, the IFT of the zero-extended DTFT of its samples

gives back the original continuous-time signal

can be reconstructed from its samples

, it must be true that

, since a sampled signal only supports frequencies up to

(see §A.4). This completes the proof of Shannon's Sampling Theorem.

A ''one-line summary of Shannon's sampling theorem is as follows:

That is, the Discrete-Time Fourier Transform of the samples is extended to plus and minus infinity by zero, and the inverse Fourier transform of that gives the original signal. The Continuous-TimeAliasing Theorem provides that the zero-padded

are identical, as needed.

Shannon's sampling theorem is easier to show when applied todiscrete-time sampling-rate conversion, i.e., when simple decimationof a discrete time signal is being used to reduce the sampling rate by an integer factor. In analogy with the Continuous-Time Aliasing Theorem of §A.2, the Decimation Theorem states thatdownsampling a digital signal by an integer factor

equal blocks and then summing (aliasing) those blocks. If only one of the blocks is nonzero, then the original signal at the higher sampling rate is exactly recoverable.